Today was Hamlet Day…and it was a special one, because it was the 40th Anniversary of Pangnirtung.  The Recreation Committee organized such an amazing day packed full of awesome activities-speeches, games, contests…a feast and an Inuktitut Dance/Concert!  So much fun!  I had the afternoon off so I joined in on the fun at 1pm and didn’t get home until just after 8:30pm…it was a long but fun day.

The opening ceremonies were at 1pm at the Community Centre.  There were speeches and well wishes from the Premier Eva Aariak, Minister of Community and Government Services Lorne Kusugak, Deputy Minister of Education Kathy Okpik, MLA Hezeciah Ooshootapik and the Mayor of Pangnirtung Sakiasie Sowdlooapik. (I hope I didn’t forget to mention anyone–but I might have, that’s not my intention though!) 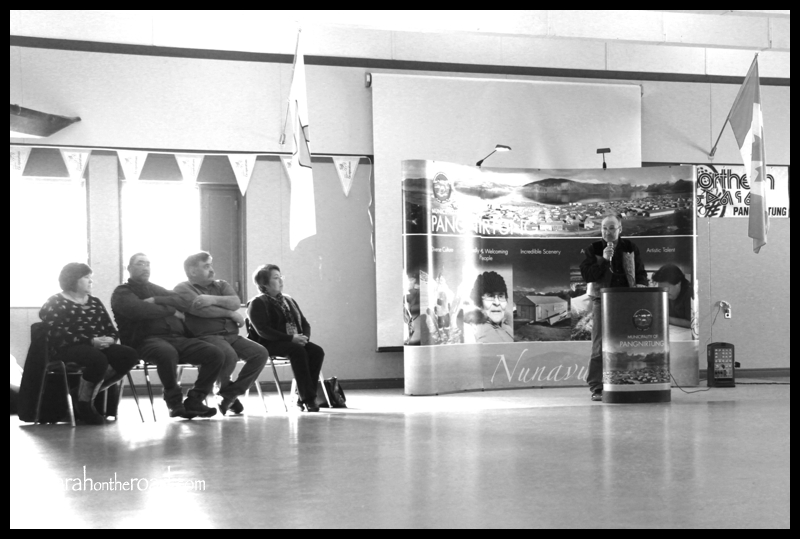 After the speeches everyone headed outside and there was a candy toss.  People got on the roof of the Community Centre…and then toss candy out into the crowd!  I ended up with 1 tootsie roll..which was an awesome score!

Then games started, everyone broke into three groups… Kids under 12, Over 13 years (that’s my group) and then the Elders.  The Over 13 years old group headed to the beach for games.  The first game was a dice game–roll doubles and you are out (I rolled doubles on my 2nd roll!)…the next game we played was a golfing one-had to get a hole-in-one…(think SNOW, YELLOW golf ball, and a badminton birdie behind the hole..it was no SURPRISE that I was not a winner at this one either!).  Then we played another dice game…when you rolled a certain number–you had to go into the middle and pick up a small hair elastic (the numbers randomly changed with this game)..and the idea was at the end the person with the most elastic won!  The next game was a marshmallow toss–think egg toss, but eggs were too pricey…so substitute an egg!  The last game was a traditional Inuit game.. of a rock toss…you had 3 tries to hit one rock off of another one.  The women I was playing with had MAD skillz… again it was a lot of fun to play, chat and watch others…But after the afternoon in outside I was ready to get warm at the end! 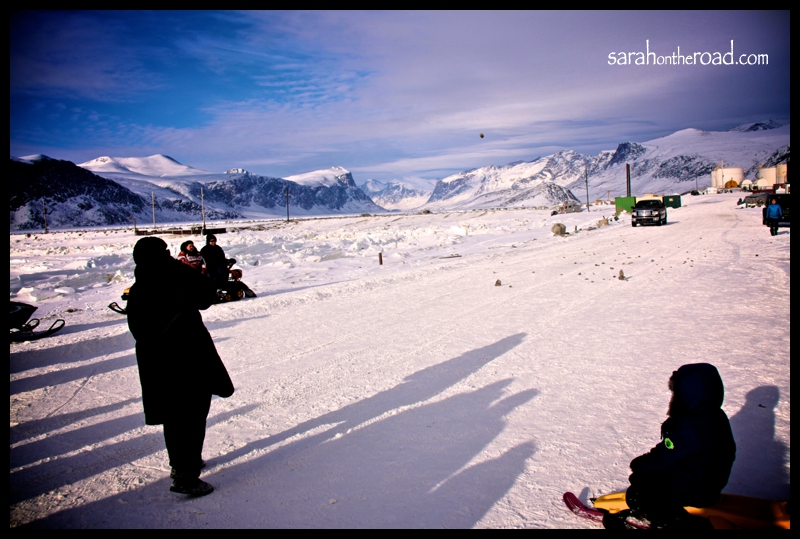 Kids playing…I took this shot about an hour before one of the kids that were playing on the stacked docks… fell or slipped or jumped (not 100% sure what happened)…and landed funny and hurt themselves.  They were taken to the Health Centre to get medical care…I hope that they are feeling better now, and weren’t too seriously injured.

After the games, I headed back up to the community centre to go look at the Fisherman’s Catch.  It was a contest to display random, weird things that were caught that were NOT turbot fish!  All the objects were found from DEEP down in the Cumberland Sound. There was quite a few really random and slimy things on display…. shells, octopus-or something that looked like it? squid?, bottom feeder fish, jelly fish… and somethings that I had no clue what they were, and am glad that the water is as cold as it is…because even if it was SAUNA hot, I wouldn’t be caught in the same water as them!

Next on the agenda was the Community Feast…so I made my way up to the High School Gym. Found myself a seat and visited with friends..and watched people.  Oh how I miss going to random busy spots sitting down and watching people.  I use to love to go to Dundas Square in Toronto just for this reason.  I got my people watching fix in while waiting for awards to happen, and feast to start.  Before the feast  Premier Eva Aariak presented the Queen Elizabeth II Diamond Jubilee Medal to Jenna Kilabuk and Jayko Ishulutak.  Jenna has done a ton of work for the community in organizing events and is also a role model for youth.  Jayko is a full-time carver and also very active in the community.

Here are some photos of the setting up of the feast… Some hunters brought in cardboard boxes, broke them down and started arranging various cuts of meat on it.  Caribou, seal and arctic char… Then pieces of plastic sheeting was cut up and placed around the gym…and the meat was distributed on it!

There was also Caribou and Char Stew…(I had the Char Stew it was yummy!)…turkey, cooked turbot and seal…plus lots of veggies, fruit, cheese and crackers!  Don’t forget about the deep fried bannok…it’s the donut of the north! SO DARN GOOD! And there was chocolate cake as well… so glad I got a picture of it before it disappeared–literally in like 10mins! 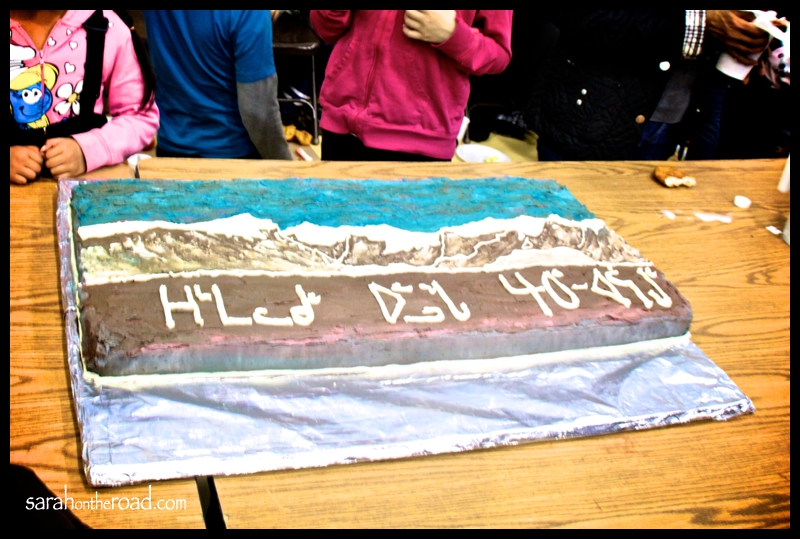 There was a fashion show of dresses/outfits made out of garbage bags!  They were all SO amazing… it was hard to believe that they were just plastic garbage bags!

Well done ladies!  Thanks for showing us your awesome designs…

The evening ended with an Inuktitut Dance…love the accordion music…once my feet start moving, it’s hard to stop them! Many people were just listening and tapping their feet…it’s hard not to!  I posted a YouTube video “Feel the Inukness” that featured some a tune by Simeonie Keenainak. (Below is a photo of Simeonie playing his accordion.) 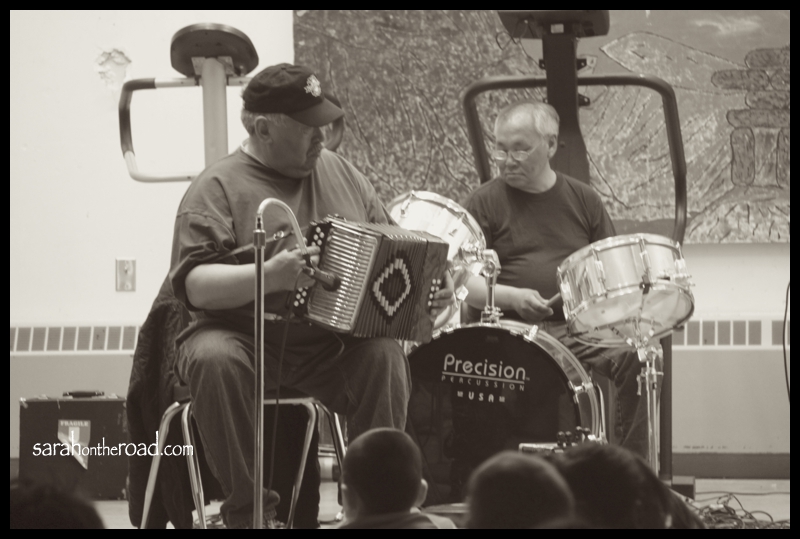 It was an awesome day… thanks to all the planning and hard work to the Hamlet Recreation Committee!  The day was such a great way to celebrate 40 years of Pangnirtung…and look forward to the next 40 years!

Posted in Hamlet of Pangnirtung

I love parades!  Growing up my family had a tradition to go over to friends of the family.  There we would gather around the TV and watch the Santa Claus parade from Toronto.  At some point the paper and pens would come out and we’d all write our letters to Santa Claus. Even when I lived in Toronto (for about 5 years)…I never went to the parade to see it live, but would watch the TV broadcast from my house, baking cookies and write my letter to Santa! I think at some point I need to go to the Toronto Parade in Person!

Northern parades are even more special… often there is more people IN the parade than standing around WATCHING the parade!  Everyone climbs in their vehicles and take part!  I remember being in the Canada Day Parade in 2009! In 2009 I also watched the Santa Claus Parade in Iqaluit… (I was there for my Birthday Weekend Getaway!)

This morning I HEARD the parade start in Downtown…then go to UPTOWN, and finally CROSS the bridge to my part of town!  The inner kid in me was SO excited… I couldn’t wait, to get a glimpse of Santa…even though it was so cold! 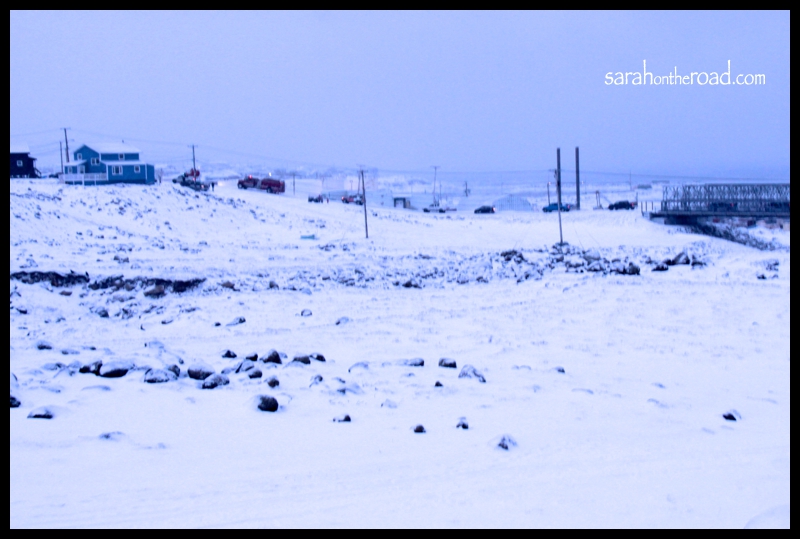 Some of the vehicles decorated their cars…. Most people in the cars had Santa hats on and were excited to wave to myself and my neighbours! There were firetrucks, RCMP trucks, Hamlet vehicles, cars, trucks, ATVs and Snowmobiles that were all part of this parade! 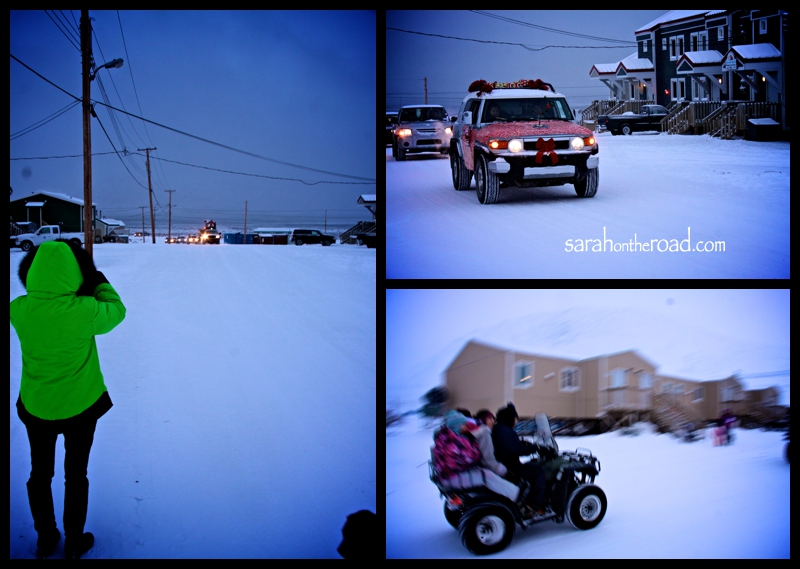 When the RCMP vehicle came close… Oliver’s voice boomed out, “Merry Christmas Sarah!” too cute!!! I’m sure he was helping with the lights and sirens…. 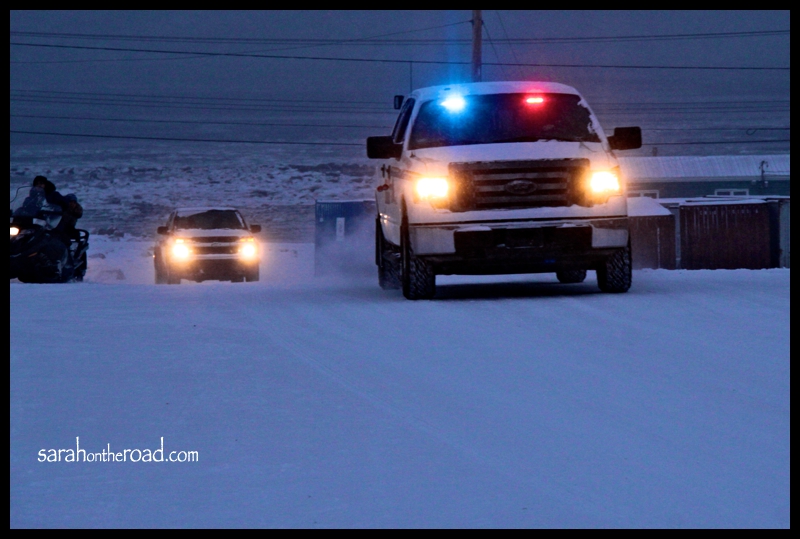 In Pang, Santa leads the parade… but I decided to put his photo at the end of my post!   Santa was throwing out ‘goodie’ bags of candies… and had some awesome tunes… I might have just done a little dance!  My one regret this Christmas is that I won’t be able to go to one of the Inuktitut Dances…and practice up on my scottish reels and fancy footwork!

I’m so glad I got to see the Pang Parade… Now that I finished the last-week-of-work-before-my-holidays AND now that I’m officially on holidays, it makes Christmas seem that much closer!

Posted in Christmas, Hamlet of Pangnirtung

Hi, How are you? I’m doing great, except for this one thing.  I haven’t lived in your goregous Hamlet for almost 13months.  I miss it there I really do…but I really don’t want to have any more water/sewage bills sent to my new house in Winnipeg.  I have tried to be really good abou this… make jokes about it…but I’m tired.  I have called your good people at the Hamlet office on at least 5 occasions in the last 13months.  In April’ 10 you sent me a record of my WHOLE account which showed that I had a ZERO balance..(after a few notices of an outstanding charges for the months of Jan, Feb (when I had left in Dec)…we sorted all that out… and you were very helpful on my 3 phone conversations as I was sorting this problem out.)

But in order to send this record you were kind of tricky then, and asked for my new address, I gave it to you in good faith. But now you like to send me little reminders, or ‘love notes’ about my time in Pang. To help me remember my water deliveries and sewage pumping? I’m not sure…

The first, “love note” happened about 6weeks in May after you had showed me that I had paid my account in full–and I had received this in writing… a notice showing that I owed $50 (the $50 deposit on the account that I didn’t actually get returned–but it counted towards my first month’s water/sewage)…. I called and talked to someone… they seemed nice, and said they would take care of it.  But then in June you decided to give me another ‘love note’.  I called back and you said, no worries it was taken care of…and it probably was sent before the last call where I sorted it out.

So I went about my buisness…when I came back from holidays in the summer I had 2 more notices… So I called mid- September when I had a chance and talked to someone YET AGAIN. Explained what was going on.. and they assured me that it would be taken care of. For awhile, at least… as now it’s 2011 I’ve received 2 more ‘love notes’.

I’m going to tell you what I’m going to do… I’m NOT going to call you anymore–I’m NOT going to respond to your notices…but I’ve PAID my bill… my account was zeroed out.. I’m not sure WHY you think that I STILL OWE you money because I don’t.  I would come explain in person, but well I really don’t have the $1,600+ to fly there from Winnipeg.

Could you please stop sending me these notices? Because I’m not doing anything about it, and you are killing a tree.  Save yourself a stamp!

Sincerely,
Sarah who does NOT live in Pangnirtung anymore.

*it’s been awhile since I’ve had a good rant, I will be returning soon with more photos and fun stories…but life has been busy!

Posted in Hamlet of Pangnirtung, rant