It’s all about Perspective!

Map on the floor at the airport in Yellowknife, NWT--can you figure out where Pangnirtung is?

I’ve been home about a week, and just needed some time to recharge.  Travel is awesome, but also can be extremely tiring. I will catch you up from photos from the end of my trip with my Gjoa Haven, Nunavut…and I have a heap of photos to catch up on the March Photo-a-Day-Challenge!

I must admit I’m getting a wee bit tired of winter…a lot of my friends had this hit them in February.  But I suppose I like to always do things in my own timing…and it’s hit me at the end of March!  But good news the forecast is looking good for the next few days.

…I must admit seeing Facebook updates in the last few weeks about ‘spring’ has hit in southern Canada has hit me a bit hard.  But then there’s where you have to put life into perspective…SPRING has arrived in the north as well.  Here in Pangnirtung, our days are getting longer (sunrise today was at 5:47am and sunset was at 7:08pm)…it is warming up (no more temperatures that are in the -30Cs or below-might have just jinxed myself there!).  YES, we still have snow (probably will for at least another 2months or so)…but it’s nice that it’s warm enough now to get outside and do stuff in that snow.

Travelling up north is never a given that you will get from Point A to Point B.  Today I was ‘green carded’ on my boarding pass before I got on my flight back to Pang.  The Green Card is NEVER a good sign.  Basically this sticker tells us that ‘landing is subject to weather’ and that if we don’t land the airline is not responsible for our hotels, meals etc.  This is a common practice of the airlines that flight up north! Our flight was delayed for about an hour because of a cross-wind reported in Pang (this isn’t a good sign!)  and then it was reported that  there was a low ceiling–but the flight went on hoping to land!

As we flew closer to Pang, we started to fly above the clouds.  Then ducked down at the beginning of the Fiord to fly under the clouds. In Iqaluit there was no clouds or wind… and you could see tons from the windows. 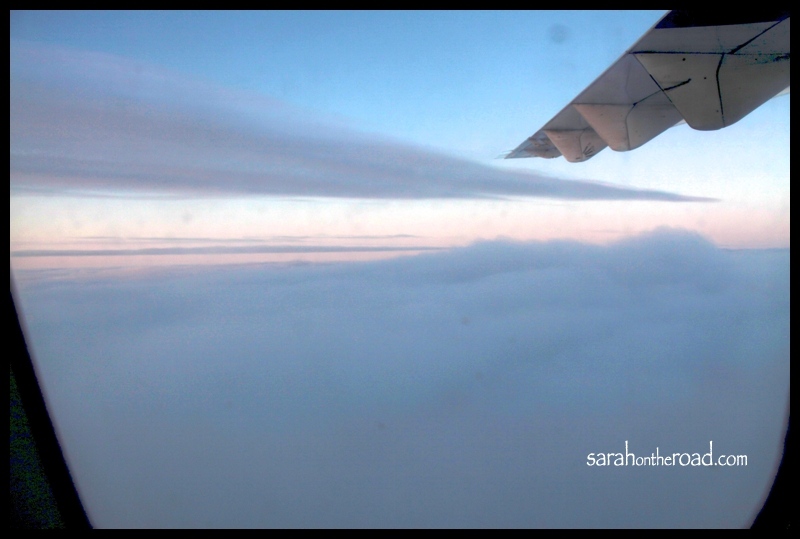 Everyone on the plane had ‘crossed their fingers’ hoping as we would land…it was like everyone was holding their breath. Wishing with all their beings that we would land.  As I looked out the window I got to see some of the ice has been forming on the fiord! 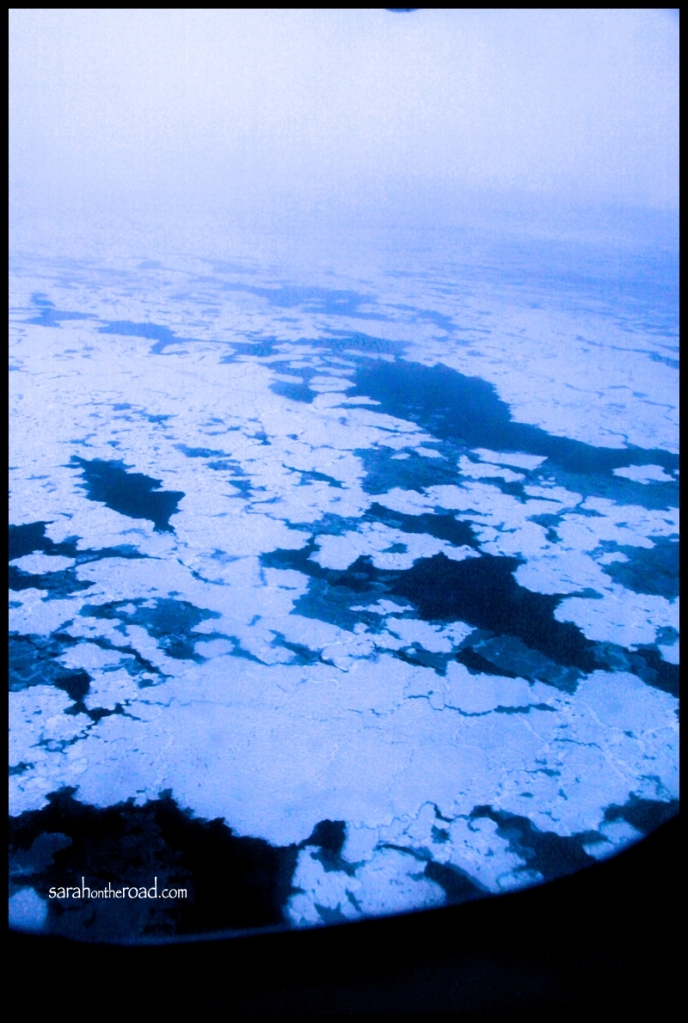 …then we pulled up and started to circle Cumberland Sound for awhile above the clouds!  After a moment the pilots made an announcement and told us that we had gotten fairly close to Pang, but the airplane was started to ‘ice-up’ so they pulled up.  They were in contact with the ground and were going to circle the Cumberland Sound to see if they would attempt a landing a second time.

After making a few circles over the Cumberland Sound, above the clouds… we started to pull up.  The pilots said that we were heading back to Iqaluit, as they  weren’t going to attempting a landing again.

So after arriving at the airport at 8am… about 2 hours and a bit in the air… I was back in Iqaluit-and  checked back into my Hotel by 12:40!  Weather delays are a bit annoying, but they don’t stress me out.  It’s just something you have to ‘roll’ with the punches with.  There’s nothing that can be gained from complaining! You just embrace it and make plans with friends… (which I have done!)

I’m just glad that I rebooked my flights to leave Pang for holidays… this will give me a few extra days to leave Pang before I need to fly to Toronto.  This ‘window’ should probably work fantastic so I won’t be delayed!  You just have to travel smartly… and also make friends in places where you get ‘weathered’ out frequently!

Well I’m back home… I just spent the last 24hours at a friends house. Thanks for your hospitality Morena and Nick… Yesterday morning when I woke up  I decided I didn’t want to be on the ‘windy’ side of town…in my townhouse during a storm if the winds were going to gust up to 150km/hr!

So I gathered together some food, clothes, camera and computer and headed downtown.  All day we were ‘waiting’ for the storm to hit… and the wind did blow, but not at the crazy as predicted. (Thank goodness)… I had a blast, playing play-dough…blocks and watching cartoons.  The power didn’t end up going off… so no glow-stick dance parties this time!

Though at times our internet connection was lost! The winds didn’t really get up to 150km/hr…but did get up to at least 68-70km/hr gusts (taken from the Environment Canada Website).  I was glad to be with friends…and not all alone wondering if my roof would fly off!

But me and my red shoes are safely at home…watching the snow fall outside.

Batten down the Hatches…

There’s weather brewing up here at the top of the world… there’s a storm system causing craziness between Baffin Island and Greenland that’s causing all of this! Here’s a screen shot of  Environment Canada’s website… 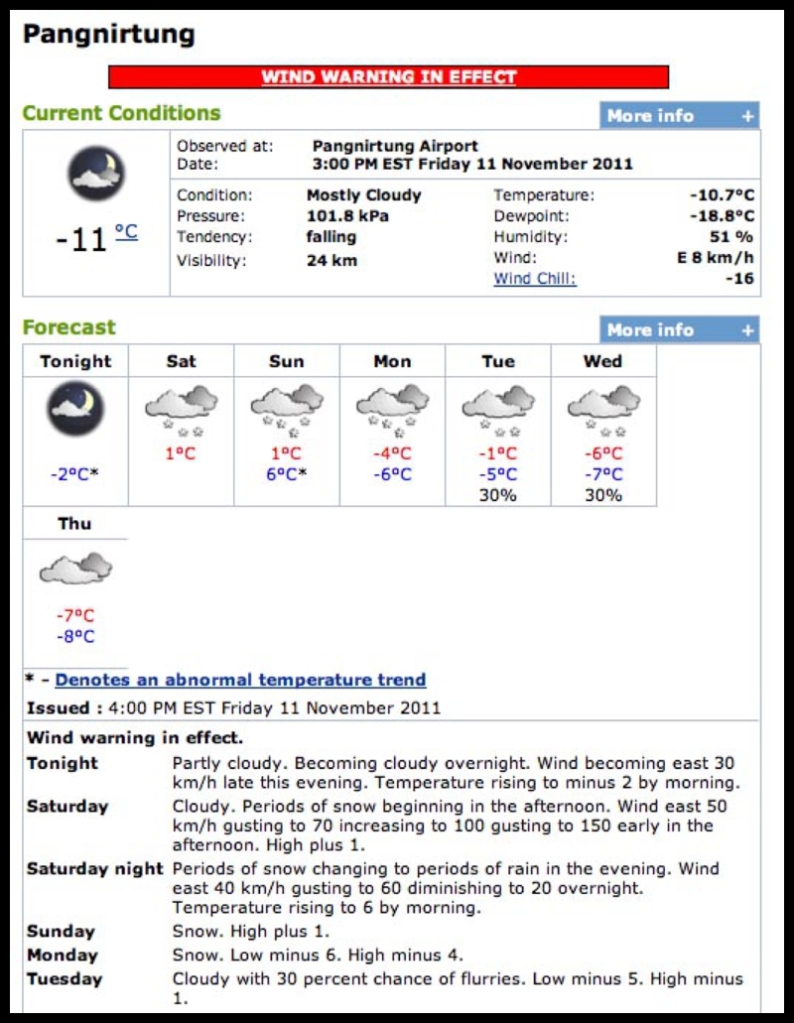 Pangnirtung is known for it’s high winds… last year at the end of November there was a huge storm and a roofs were taken off a few houses, boats were swamped and some trucks were turned over!  I walked to the store earlier today, to do some groceries…and people were preparing all through town!  Hunters were getting their boats out of the water, or securing them… at the store people were stocking up on items to carry them through!

I live on the ‘windy’ side of town… (actually in the November 2010 storm I was told a piece of roof actually came and hit the front of my house, and broke the window in the living room-I hope that doesn’t happen again!)  I’ve started to prepare a bit for the storm…some of the things I have are extra water jugs, food, flashlights, candles and matches ready. I’m also listening to the local radio…for updates on the emergency procedures.

I do have an offer to head to the less windy side of town to weather out the storm…but I’ll decide what I’m going to do tomorrow!  Maybe I’ll wake up and it will be the storm that never happened? Usually with any kind of storm like this, the power is knocked out for a period of time–so if you don’t hear from me in awhile…it was a big one!

…snow, snow and more snow! A few photos because my friend Sarah H. commented on Facebook that she wouldn’t believe it was snowing until I posted the proof.  Because I still wasn’t feeling well I stuck close to my house, and snapped these photos…

Normally you see the Pang Pass in this direction, today it was a wall of white–snow! 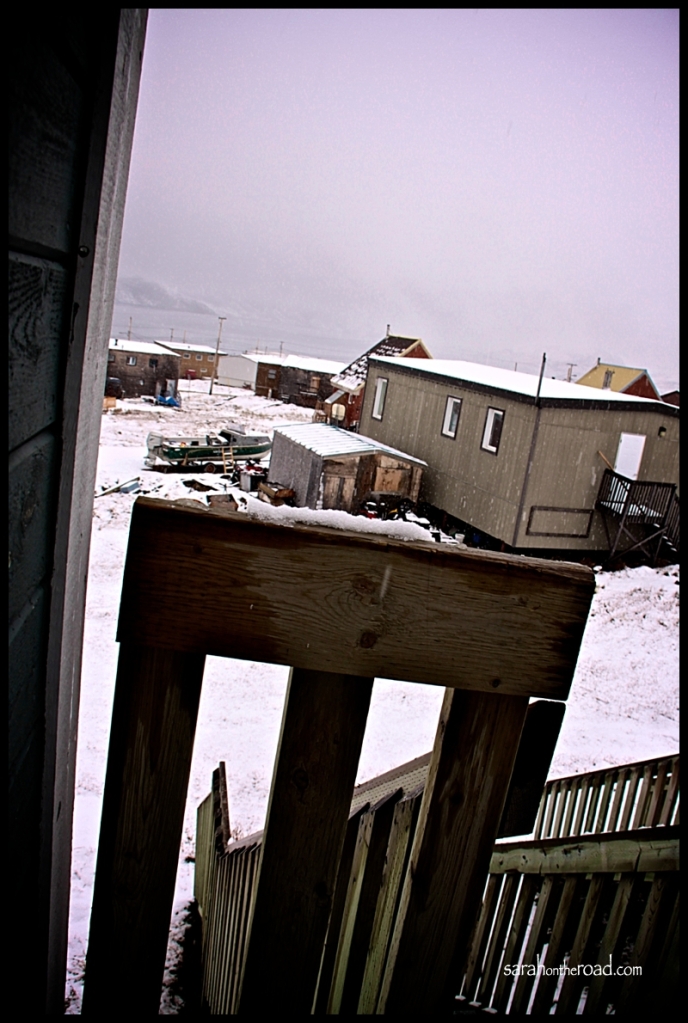 You can barely make out Mt. Duval in this photo… I know the morning flights were cancelled…but think I heard a plane tonight (dont’ know if it landed though!)

I’m not sure if this snow will be here to stay… or if it will be gone… a quick look at the weather forecast says it looks like it will be 5C tomorrow, so probably will be gone!

Morena and her boys went out to build some snowmen earlier today before it got REALLY wet out…  looks like they had a lot of fun…you can see her photos HERE!