Celebrating the Return of the Sun…

The sun has been peaking over the mountains into town so that we can see it for the last 10days or so.  I’m really enjoying how in the morning it shines on my face every morning for a little while, although it is a tad annoying because it still hits my computer screens making it hard to do work…thank goodness for blinds!

This afternoon Pangnirtung celebrated the Sun’s return…with some games on the fiord! I bundled up with my warm gear and headed down to the fiord. Even though it was around -29C…it was time to go out and celebrate the sun!

It was fun to play with my shadow, it’s been awhile. (also enjoying the low sunlight for the long-lean-shadow!)

Explaining the changes of seasons from dark to light…is hard to do.  If you haven’t lived through 24hr darkness it’s hard to explain. (SIDE NOTE: in Pang we  don’t experience a true 24hour dark period–it’s only about 20hrs…with twilight happening for a few hours on the shortest day.  But the sun doesn’t rise over the mountains surrounding Pang from end of November until mid February).   There is this sense of waking up and pure joy you get when you start to see the sun back in the sky! I was lucky I was in the south, in Ontario, for most of the dark days…but returning to the darkness was just as hard!  I’m not doing a great job explaining…so I’ll let my photos do the talking! I think my self-portrait smile says it all….

People arrived on foot, on skis, on skidoo and  kamotik, and there were a few vehicles that drove out onto the ice too! I walked out…trying not to slip on the icey road in my kamiks! 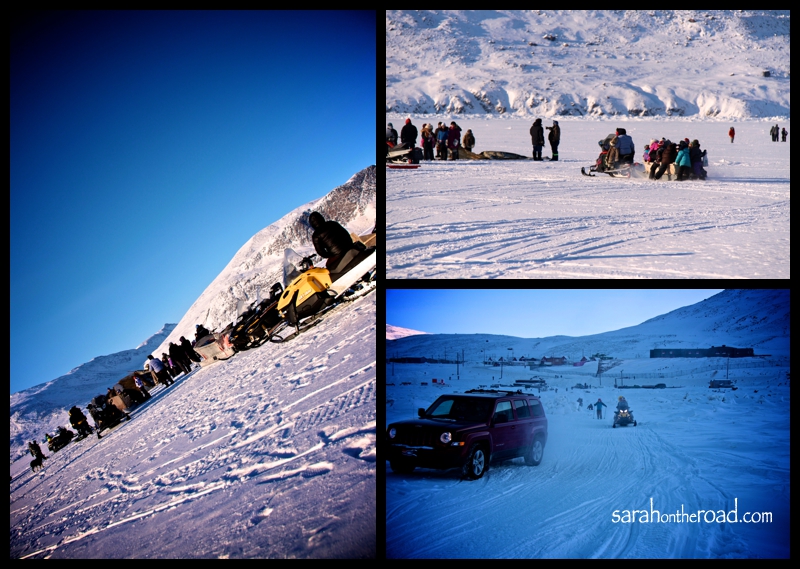 My view as I walked through the pack ice.

Kids playing on the pack ice…that builds up in the tidal flat area along the fiord.  Basically with the tide changes even in the winter…it pushes the ice up into crazy stacking ice formations as the ice cracks!

Here’s a group shot of the some of the people that came out to celebrate the return of the sun… as you can see even some dogs came out to join our celebrations!

Yep, it’s totally true…when you are celebrating the return of the sun…you need to take as many cheesy self-protraits of yourself basking in the light.  And maybe imagining yourself on a different beach..with a few less layer of clothing!

The skin tent that was made this past summer… was brought out to be a ‘warm-spot’ and place where tea and bannock were!

Then there were the games… top left-a dice game…roll a 4 and you are out…until there is only 1 person left! top right- people dressed in various fur clothing! Bottom left- some of the kids did a pyramid! Bottom right- a game of frisbee (that’s the black dot in the sky of the photo) and some skiers off in the distance(the small ant like specs in the background)… 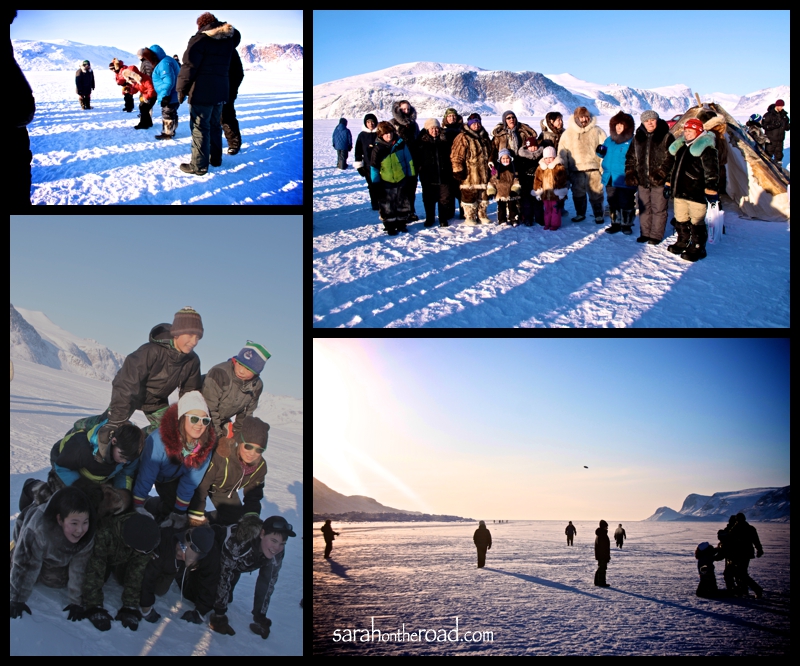 I participated, I wasn’t the last in the woman’s race…nor was I the first…and I didn’t fall down, even though I was running in my kamiks!

Waiting for the games to start… 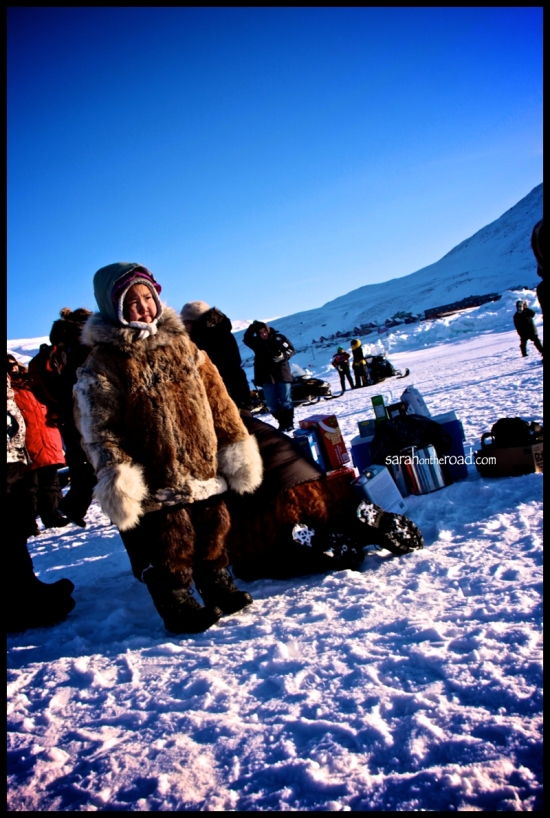 Traditional fur made Amauti…designed to have an extra ‘pocket’ to so that the woman’s baby is held against the mom’s back.  This little baby slept for most of the celebration but popped out to say hello later!

It was a fun afternoon… and am so glad the sun is back!  It really makes the -30C days feel a wee bit warmer! Here’s one last photo I took looking towards Mt. Duval.

An Afternoon on the Fiord…

…today I headed out onto the fiord to do some X-Country Skiing. I think the last time I did any x-country skiing was when I was in high school on the ski team in grade 10. Yep it’s been a few years!  After a phone call from friends…I got bundled up in a few layers…and grabbed my ski gear and headed to the fiord.  After all I bought these skis from someone leaving Pang in August… so I best be using them!!!!

Here’s a view from the fiord… I love that the moon was rising over the hills…and it was around 2pm when I took this shot!

I met up with Markus and Delia who were skijoring…just as I was leaving the harbour and almost on the other side of the pack ice.

Everything became quite frosty! 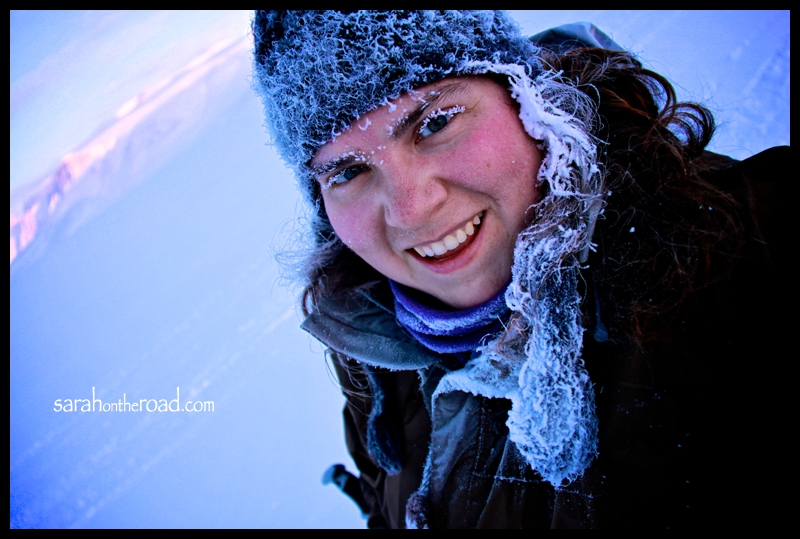 Markus and Sola in action… 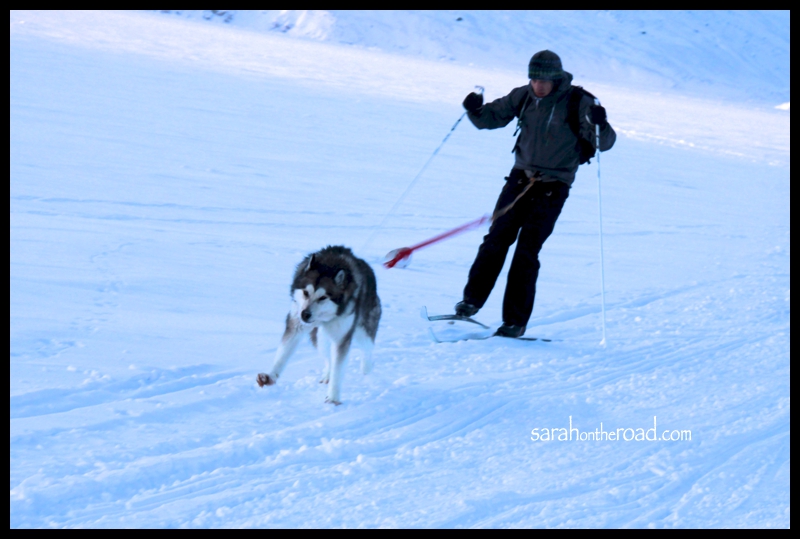 Me in action… I think at this point my legs were screaming at me…but all in all it’s was a great feeling!

Just wanted to say thanks for the emails and comments on my last post. Each one meant a lot!  Thank you. This last photo is of me once I reached home after about an hour and 1/2 out in the -22C weather.  I was a tad bit frosty… but still toasty warm under my layers! 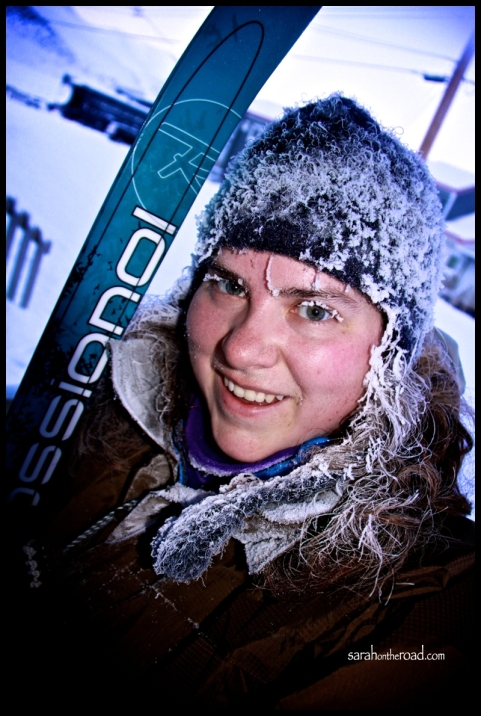 Can’t wait to do it again… although next time I’m duct taping my heels hopefully that will stop the crazy blisters from forming! What did you get up to this weekend?

Posted in walk in the 'hood, winter

“There is nothing in the world more beautiful than the forest clothed to its very hollows in snow. It is the still ecstasy of nature, wherein every spray, every blade of grass, every spire of reed, every intricacy of twig, is clad with radiance.”    William Sharp ((pseud. Fiona MacLeod), 1855-1905)

I woke up this morning to a winter wonderland…much to my dismay.. the wet/soft packy snow had froze with a lot of powder on top of it.. so no snowmen for me! After shovelling a bit, and clearing off the cars…I took a walk and got some photos! 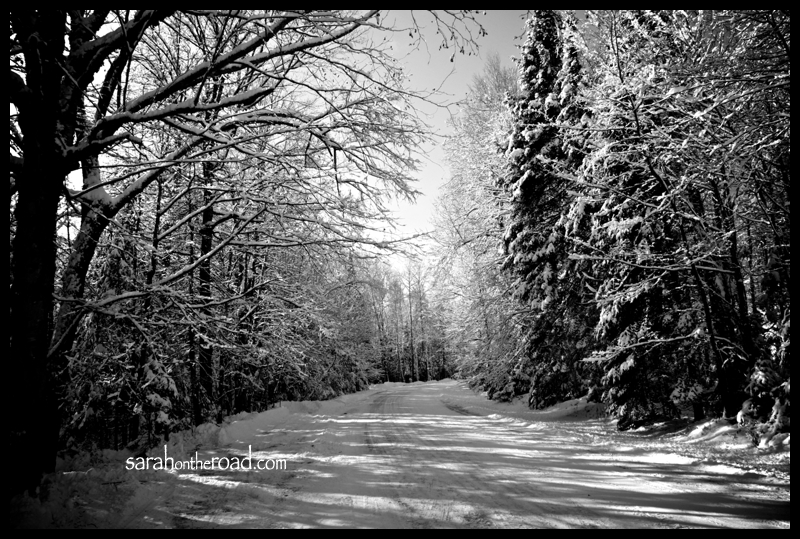 Living in Pangnirtung, where there are no trees makes me that much more appreciative when I do see them… seeing fresh snow painted so brilliantly on their branches was a welcome treat! 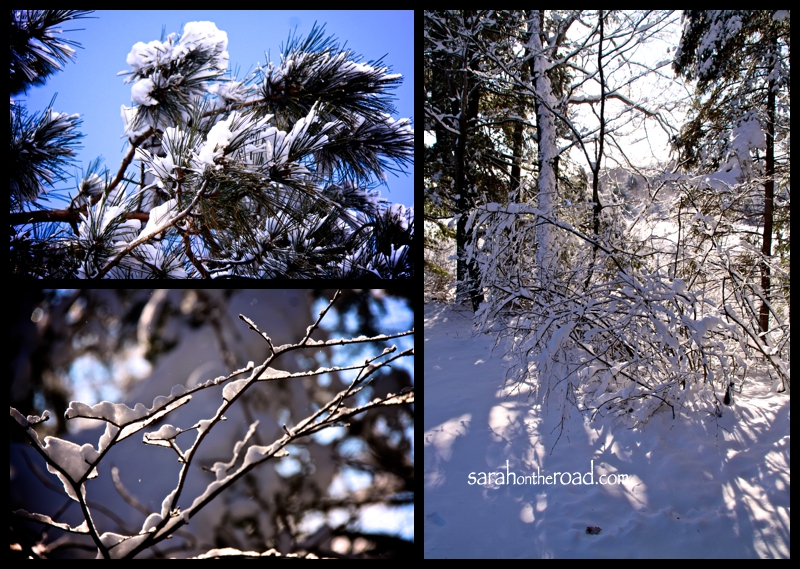 Milo looks so extra small beside these great big beauties!

I’m having a fabulous time with my mum here in Haliburton…filled with PJ days, movies and good food (although I think I have reached my turkey quota for 2011–good thing New Years is around the corner!)

I have plans to do a bit more travelling before my vacation is over… going to a wedding, meeting some friend’s new babies, catching up with friends in the Toronto area…this involves a bit more travelling, let’s hope the roads stay in good condition…but we all know how I like to stay on-the-road!

Here’s a random fact for you in 2009 I had only a period of about 6-9weeks without snow!  (but then again, I was living in Pangnirtung, Nunavut–about 45kms south of the Arctic Circle…one should expect this kind of weather!)… (I wrote about how in the middle of June–there was a crazy amount of snow in Pang in 2009…you can read about it HERE)
This morning I woke up, on MAY 1st–to SNOW… apparently when you live in Winter-peg…you too can expect to experience to get snow at ANY time of the YEAR! Oh JOY oh BLISS!!! 🙂

It’s really hard for me to believe that on Friday night…I had my first dinner sitting out at this balcony with a friend!!! All week I had been enjoying driving with my sunroof open, windows down… but apparently summer is over, and well Winter is back!  (I wish I had known this before I took my snow tires off Milo!)…
I think it’s a great thing that I have a collect of fantastic winter hats…that I can keep on rockin’!

Posted in Looking out the Window, snow, winter